What We Do
Marketing On University Campus Programs
University and Campus Marketing programs are a great way to position your brand with a very desirable demographic. It is a unique environment and target audience that requires a knowledgeable team to deliver a memorable and successful experience. Credit Card Acquisition Programs
Credit Card Acquisition programs are usually highly focused. You need to achieve specific results in a compressed amount of time. Jumpstart has been there. Whether itâs a mall setting, or at a sporting event we understand how to deliver maximum results regardless of the venue or time frame. Door-to-Door Programs
Can Door to Door programs really be successful? The answer is YES if you know what you are doing. Effective Door to Door sales is a special skill and Jumpstart has years of experience in running a wide variety of campaigns. Jumpstart understands we are representing your brand and have the skill to make sure it is well represented. In-Store & Retail Kiosk Programs
Jumpstart has all the resources to deliver you a turnkey kiosk program. We make sure every detail is taken care of from design and assembly to staffing. You can rest assured your product will be delivered exactly to your specifications and ensure your customers leave with a positive impression of your product/service and company. Sales Promotion & Event Programs
When you have upcoming Sales Promotions or Special Events Jumpstart is an extension of your sales team. Our sales professionals have numerous events under their belts and understand how to quickly learn the way you want your sales message delivered.
Are We A Fit?
We Back It Up
Transparency, Guaranteed performance; these are not necessarily words you hear from consultants or marketing firms. Jumpstart has a different approach. We will build a business case with you that makes sense for all parties so you can go forward with confidence that your campaign is also a prudent investment. FAQ
Check here for some of the most common questions about conducting an experiential marketing campaign. If you donât find your answer here then drop us a line or give us a call. We love tough questions. We Work With Great People
And we donât just mean our staff. A successful campaign requires chemistry between all the stakeholders so we choose our customers carefully. We like to build long term relationships based on mutual trust and integrity and over the years have been fortunate to work with some great people that have helped us constantly strive to improve our services. What We Live By
Youâll get our best. We will work ridiculously hard to make sure you realize the goals of your campaign. We are not afraid to try something new or find a better way and are vested in our customersâ success. We donât see ourselves as a supplier but as a trusted partner you can rely on to not make promises they canât keep and honour all commitments.
JumpStart In Action
Client Wins
Donât take our word for it. One of our end goals for every campaign is to have a client that is so satisfied they are willing to write us a letter of reference. We are extremely proud of the extensive portfolio of references we have received from customers in a wide variety of industries. Here are just a few. Case Studies
We love it when a campaign delivers the expected results for our client. Browse through this section to read case studies on successful campaigns we have conducted in the past. It may give you some ideas on what Jumpstart can do for your company.
Join Our Team
Be Part Of It
If delivering unique experiences in constantly changing environments sounds like something that gets you excited then you need to give us a call. We build memorable events for our clients and are constantly looking to work with people who get that delivering experiential marketing requires professional presentation skills and the ability to think on your feet. Partner Network
We partner with some truly great companies and people on our projects and have forged a network of complementary providers with whom we can collaborate to come up with the best solution for our customers and yours. Supply Network
With a diverse range of projects we are always on the lookout to build relationships with innovative suppliers, the more innovative the better. Whether itâs a unique item or a personalized service we want to hear from you and how you can help us deliver awesome results for our customers.
Contact
Blog
1 800 506 6592
Privacy Policy

A DIVISION OF THERevenue Acceleration GroupÂ®

One of the key elements of successful street marketing is the element of surprise. Think back to times you were involved in a routine activity or surroundings and something unexpected happened that impacted one of your senses â it made a lasting impression! Now if that impression is associated with a brand you have created a successful experiential marketing effort that will yield a high ROI.

The following examples are passive in terms of requiring audience participation; however the imagery is powerful when presented in a routine environment.

The goal here was two-fold when it comes to the “Think” part of the guerilla marketing process of these campaign examples. First the creators had to capitalize on the environment that was a suitable routine to disrupt by utilizing everyday items such as bus shelters, benches, walls, etc. In terms of creating a script, think about the routine that your desired audience participates in and where, when, and how the moment is going to be delivered. Second, there had to be a “shock” value so the audience would make the desired association when they were once again involved in that everyday routine. The primary question was “what do we want this person to think about the next time they are doing this?” This is also the time to strategize what comes before (if anything) and leading up to the campaign. Does it tie into any other media support? Are there follow up steps or sequences that can expand the story and draw the audience deeper or is it a one off campaign?

In order for a passive experience to be effective it has to invoke an immediate emotional connection and association with the subject matter when the audience comes into contact â the “shock” value. In the following examples the creators utilized the everyday surroundings as the “set” taking into account the visual surroundings and the state of emotion that the participant would be experiencing while performing the action.

The first example comes from UNICEF in Finland. The organization wanted to raise the level of awareness with the Finnish people of the plight of some 145 million orphans or abandoned children throughout the world.

14 baby strollers were placed in major cities throughout Finland â and left alone â as though they were abandoned. A recording of a baby crying was playing inside the stroller. People who approached the stroller to investigate were greeted with the message “Thank you for caring, we hope there are more people like you. UNICEF Be a mom for a moment.” 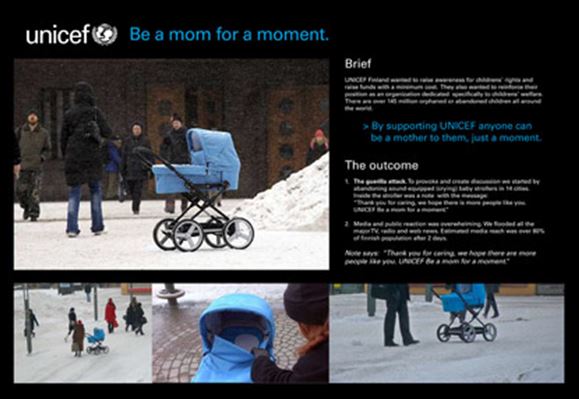 The result? All major TV networks, radio, and web media reported on the campaign. It was estimated that 80% of all Fins were aware of the campaign within 48 hours. 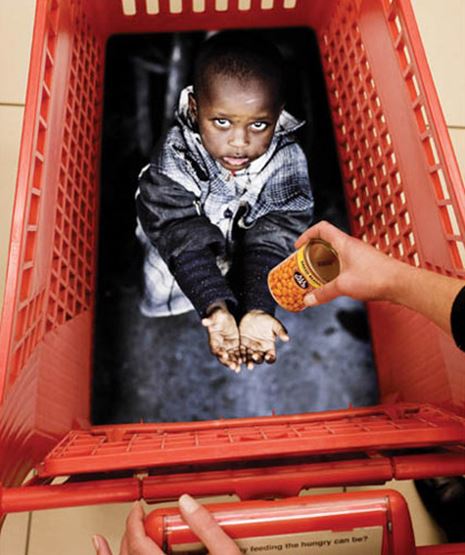 In Johannesburg South Africa the plight of hungry children is particularly daunting. Posters were placed inside shopping carts to demonstrate to consumers how easy it is to feed the hungry by donating a can of food while they are shopping.

Both of these campaigns were extremely effective in introducing a “shock value” into everyday surroundings that had an instant connection with an emotion â thus leaving a lasting impression. There were also immediate calls to action that the audience could act upon. The images went viral.

Once a campaign has been delivered the success can be exponentially expanded by launching a second time through social media documenting the reaction of the people who experienced the initial campaign. People love to watch other peopleâs reactions to situations because they like to compare them to their own generating further traction for the message.

- Written by Keith Andrews -
Back to Blog

1 800 506 6592
© 2022 Jumpstart Sales & Marketing Inc.
What we do
Marketing on University Campus Programs
Credit Card Acquisition Programs
Door-to-Door Programs
In-Store & Retail Kiosk Programs
Sales Promotion & Event Programs
Are we a fit?
We Back It Up
FAQ
We Work With Great People
What We Live By
Jumpstart in Action
Client Wins
Case Studies
Join Our Team
Blog
Contact
A division of the
Revenue Acceleration GroupÂ®